In accordance with Formula’s May 2016 announcement that it will report its financial results under IFRS as of January 1, 2016 (date of adoption), the company’s Consolidated Statements of Financial Position and Consolidated Statements of Profit or Loss for the first quarter ended March 31, 2016 and the comparative periods of 2015 are also reported under IFRS. Up until the most recent reporting period, Formula’s reporting was based on US GAAP.

The main difference between IFRS and US GAAP reporting, as it applies to the Company, relates to the consolidation of the results of operations of subsidiaries. Under US GAAP, companies are evaluated for consolidation purposes based on voting interests, to determine whether the reporting entity controls and therefore consolidates them. Under US GAAP, the majority voting interest holder of a company (i.e., ownership of more than 50% of the outstanding voting shares of an entity) consolidates that company. Upon transitioning to reporting based on IFRS, the Company consolidated the results of operations of Sapiens International Corporation N.V. and Magic Software Enterprises Ltd. over which it has effective control (“de facto control”), as required under IFRS. “De facto control” exists when the Company’s rights in such entities are sufficient to give it power to have the practical ability to direct the relevant activities of such entities even where it does not have more than 50% of the voting power therein. The Company believes that consolidating the results of operations of entities over which it has “de facto control” provides more consistency in accounting treatment and financial reporting over future periods, whether or not the Company's interest in these entities exceeds 50% (but provided that, and for as long as, it has “de facto control” over such entities). The concept of “de facto control” does not exist under US GAAP. The Company believes that this change provides shareholders with information that better reflects the Company's operations through the subsidiaries that it effectively controls.

Commenting on the results, Guy Bernstein, CEO of Formula Systems, said, “We are very pleased to report another quarter of excellent results across our entire portfolio. Sapiens' revenues grew by 20.9% to $49.6 million for the first quarter. In addition, Sapiens launched several products including its new advanced analytics solution, Sapiens INTELLIGENCE, thereby continuing to expand its revenue base and enhance its competitive position. Matrix reported a tremendous first quarter, improving both its top and bottom line. Matrix’s growth is a direct result of having strategically identified future growth engines and executing its growth plan by investing in its offerings and infrastructure to target these high growth segments. Magic reported another quarter with double-digit revenue growth year over year while maintaining operational profitability at a solid 15%. Magic continues to invest in its products, receiving very positive customer feedback and strong uptake for its solutions, including its professional services for cloud and mobility solutions. We are looking forward to adding the results of our 50% stake in TSG – formerly a subsidiary and the military arm of Ness Technologies, which we acquired in equal parts with Israel Aerospace Industries (IAI) during May 2016. Engaged in the fields of command and control systems, intelligence, homeland security and cyber security, TSG adds a valuable fourth leg to our portfolio.” 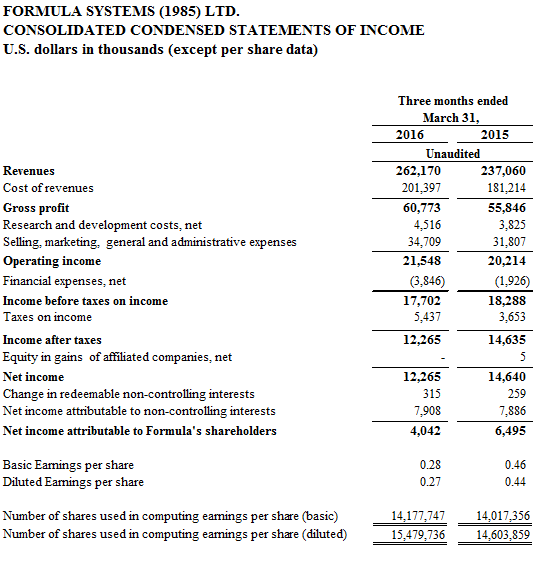 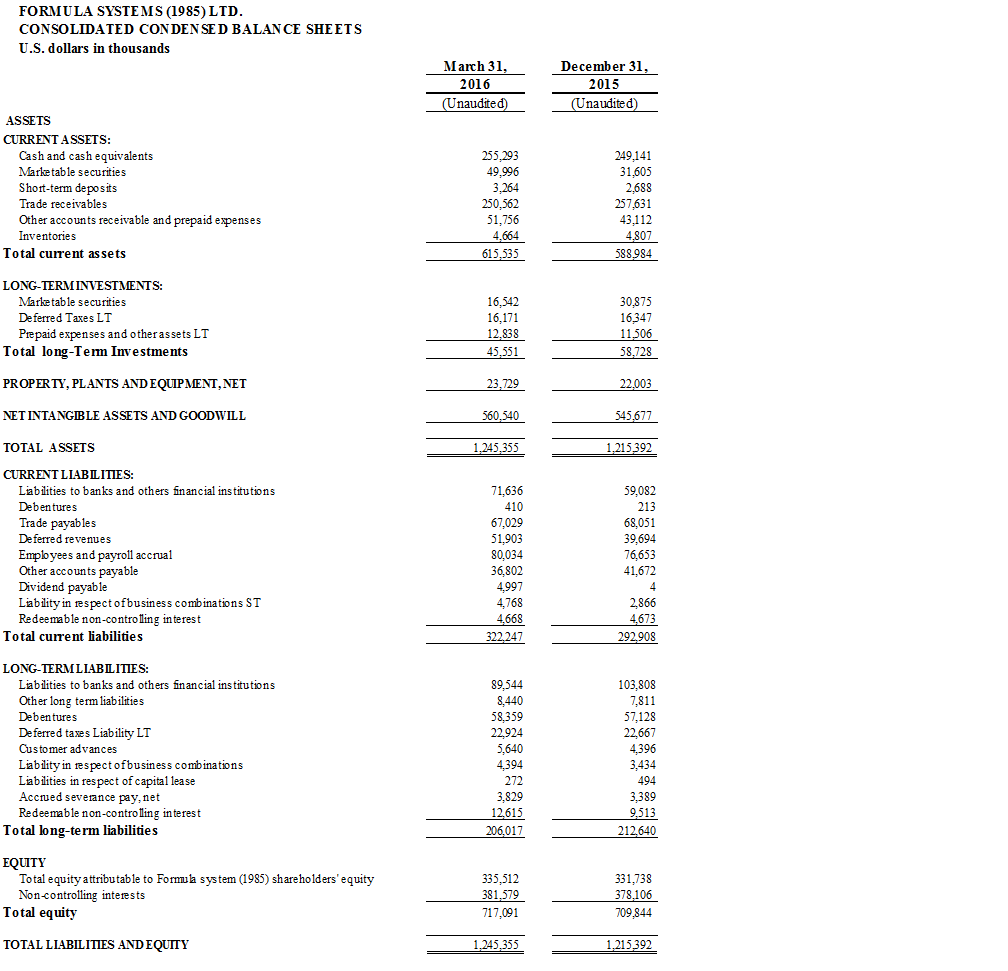 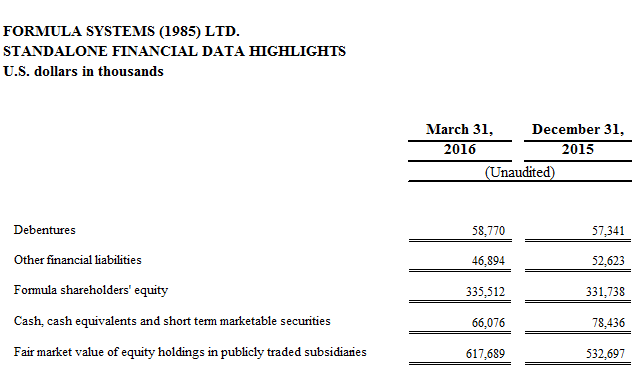 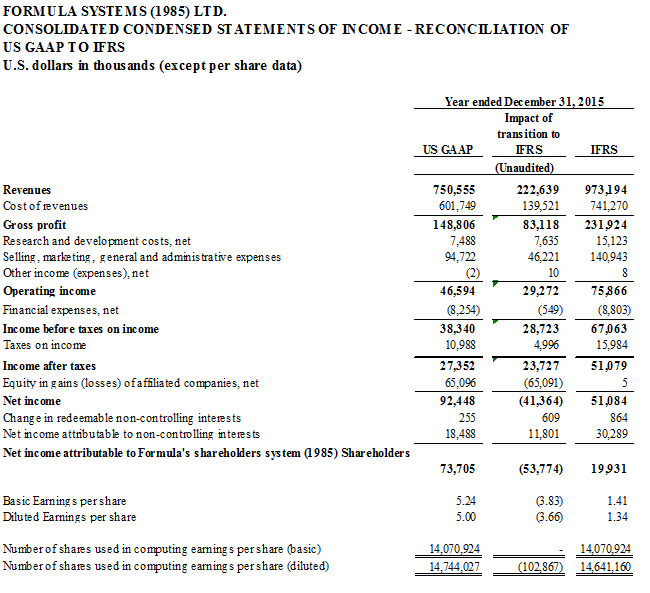 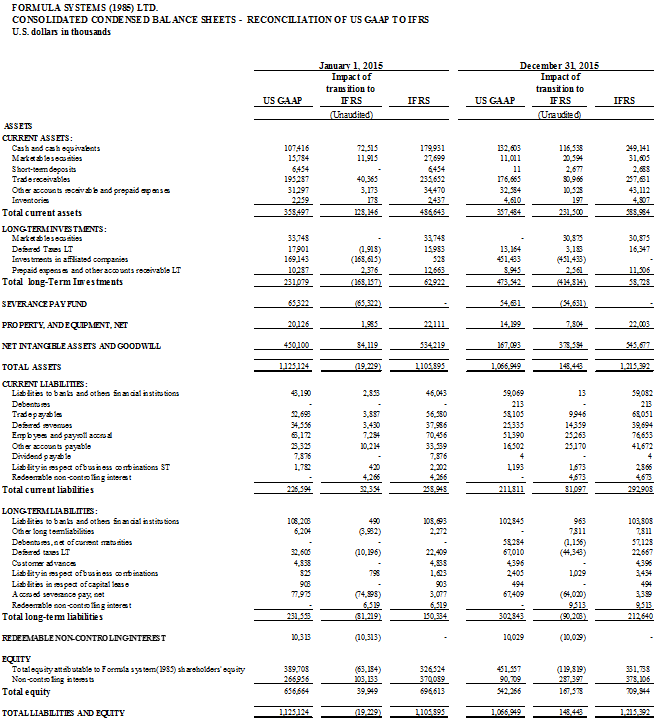