Commenting on the results, Guy Bernstein, CEO of Formula Systems, said, “We are very pleased to report significant growth in all major financial indices across our entire portfolio.

"In the second quarter and first half of 2018, Matrix achieved double-digit growth across all its key financial indicators. Matrix reported revenues of NIS 762.2 million in the second quarter of 2018, operating income of NIS 50.1 million, and net income attributable to Matrix shareholders of NIS 32.7 million, reflecting an increase of 14%, 22.1% and 43.3% respectively, year over year.

“The increase in Matrix's revenues can be credited to the strategic deals that it won over the past year, including establishing a credit database for the Bank of Israel, significant deals in the field of cyber and other successful business initiatives. In the US, Matrix is beginning to reap the benefits of its acquisitions and continues to see the US market as a strategic market for its continued growth.

“Matrix also continued to focus on high-profit activities and on developing new models in the field of employee training and placement well as in the integration and infrastructure solutions sector, which continues to expand and enjoy increased demand.

“Sapiens’ improved margins and profitability in the second quarter and first half of 2018 reflect its success in making significant strides to getting back on track, including cost-cutting programs and the effective leveraging of its global assets. In the second quarter, Sapiens’ revenues totaled $72.2 million up 4.5% compared to last year, its operating margin improved to 6.8% and its non-GAAP[1] operating margin was 13.2% up from (4.3%) and 4.7% respectively, year over year.

“Sapiens continues to advance towards its key objectives of expanding its P&C business in EMEA, and North America, while improving profitability. Sapiens’ enhanced digital insurance offering along with its proven products and personnel are winning new business, particularly with its P&C platforms, and is expanding its business with new and existing clients and building its pipeline for future growth. This quarter’s results demonstrate Sapiens’ ability to expand market leadership, particularly in the areas with the greatest client demand in the insurance market: digitalization, data analytics, and legacy transformation.

“Magic’s record-breaking financial results for the second quarter and first half of 2018 demonstrate that Magic is continuing its impressive forward momentum across all of its markets and regions, confirming that its strategic business initiatives are paying off. The results for the second quarter were at all-time highs with revenues of $70.2 million, operating income of $8.0 million and non-GAAP[2] operating income of $9.8 million, up 7%, 26% and 9% respectively, year over year, driven exclusively by organic growth.

“TSG is expanding its partnerships to execute additional strategic projects in Israel and around the world.

“Lastly, we are excited by Michpal's continuing growth, with revenues for the first half of 2018 increasing by more than 25% year over year, mainly as a result of the successful January 2018 official launch of its new product and new service line – "Michpal Pension" and "Michpal PensionPlus”. Over 1,500 existing Michpal customers have already adopted this new business line, which is the first step in our business strategy to expand Michpal’s offerings. We expect that Michpal’s strong financial position, coupled with its activities towards promoting and growing its business organically and through M&As, will continue the company's momentum through 2018 and beyond.”

[1] Non-GAAP measures as detailed in Sapiens’ press release from August 7, 2018 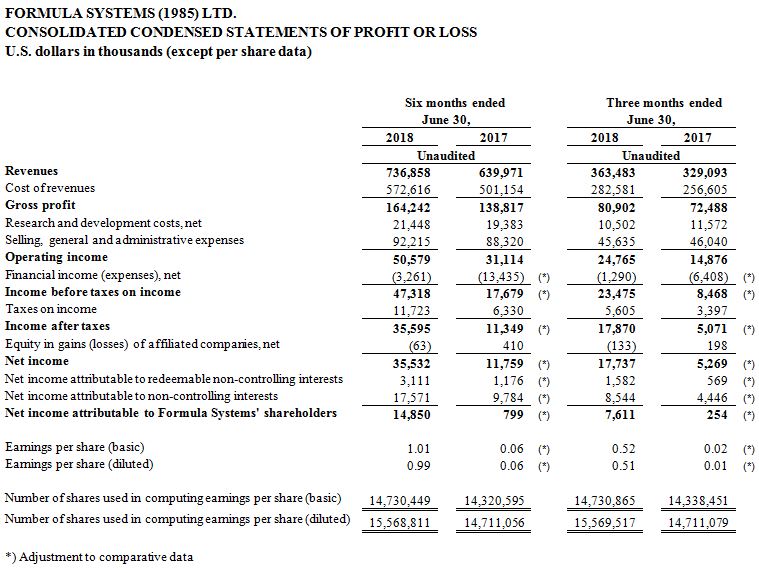 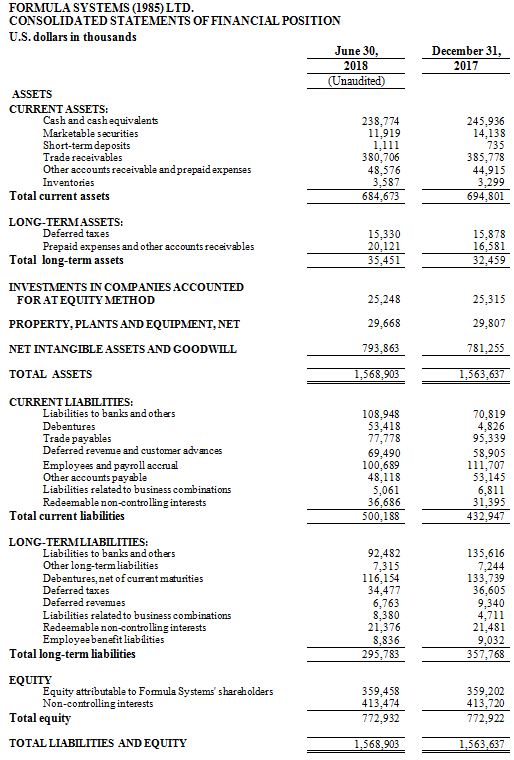 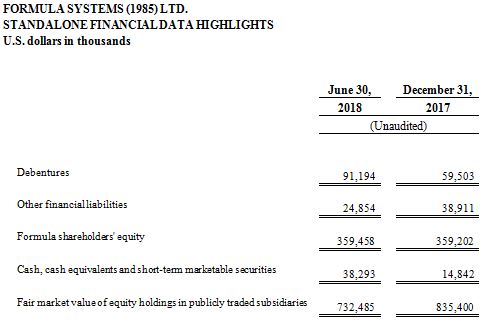