Revenues in the second quarter grew by about 16.2% to approximately NIS 886M;

Today, Matrix released its results for the second quarter of 2019 and for the first six months of the year. Matrix shows double-digit growth across all key indices compared with the same quarter and the same period of the previous year: revenues, gross profit, operating profit, net profit, and EBITDA. The results are particularly spectacular in light of the fact that the number of working days in the second quarter was about 2.5% lower than last year, because of holidays and the election day, which occurred during the quarter.

Matrix has recorded sharp growth in the profitability of the company in two sectors of operation, which constitute the core of Matrix operations in Israel and the US. In the first six months of 2019 (the period), operating profit in the IT Solutions and Services, Consulting and Management sector in Israel increased by about 24.6%, to approximately NIS 60.6M.  Operating profit for the period in the IT Solutions and Services sector in the US grew by about 20.5%, to approximately $8.8M.

Matrix continues its policy of distributing dividends every quarter at up to 75% of net profit. In March and June 2019, dividends in the amount of approximately NIS 58.3M were distributed.

Today, with the release of the second quarter reports, Matrix announced an additional distribution of dividends of 43 agorot per share, totaling approximately NIS 26.7M. Since the beginning of 2019, Matrix has distributed a cumulative dividend in the amount of NIS 85M. 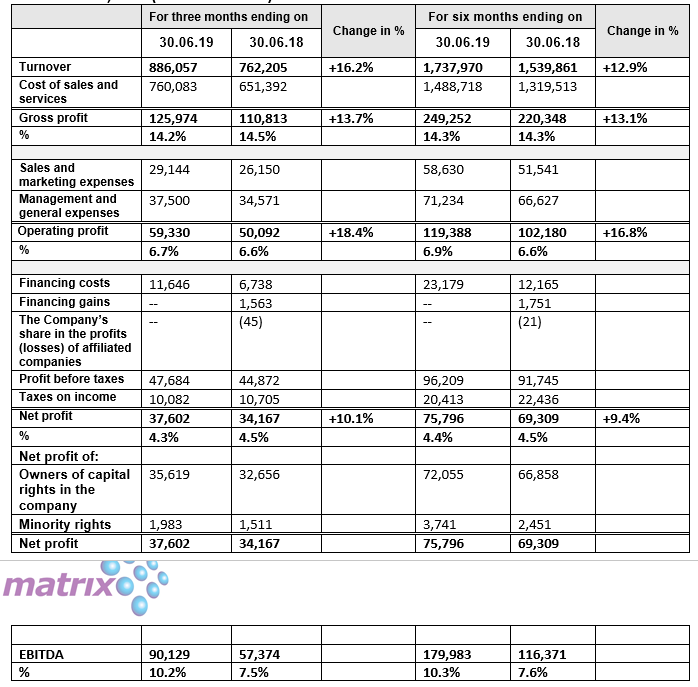 Moti Gutman, CEO of Matrix: "We are proud of our results for the second quarter and the first six months of 2019, which reflect continued growth in our core areas as well as in new ones, both through organic growth and through the implementation of our acquisition and merger strategy. We recorded an increase across all the indices in the first quarter and the first six months of the year, despite the fact that Passover, Independence Day, Shavuot and the Knesset elections all occurred during the second quarter. This quarter we consolidated for the first time the reports of Dana Engineering, which adds great value to the engineering consulting activities of Matrix, and the results of Medatech, which strengthens our operation in the ERP market. These acquisitions have high growth potential, together with continued organic growth deriving from ongoing operations of the company.”

"Matrix is ​​currently implementing innovative and breakthrough technology projects for companies and organizations of all sizes in Israel and worldwide. We work in a wide range of fields, from the field of IT to consulting projects in the area of national infrastructure in Israel and around the world. The professionalism of Matrix, our wide range of solutions in various fields, the financial strength of the company, and its stable and committed management enable us to successfully carry out small-to-mega projects, within the constraints of budget and schedule, as we did in establishing the credit database for the Bank of Israel, digital transformation projects, significant cyber projects, and other unique projects.

Gutman adds: "For many years, Matrix continues to lead the IT market in Israel and maintain financial stability. Matrix is the largest company in the field, and the largest employer, with over 10,000 employees. STKI has ranked Matrix as the leader in the IT services market for the 14th consecutive year. The Midrug credit rating company has confirmed Aa3 issuer rating for Matrix, based on a stable outlook, for the 12th consecutive time, since 2007—the highest rating for IT companies in Israel. In addition, in the ranking of the best places of employment, performed annually by The Marker and CofaceBDI, Matrix once again occupies first place among all information technology companies."